The Travis Walton 1975 abduction case is one of the more remarkable cases in ufology for several reasons. (If you’re unfamiliar with the case, then start here.) But one of the reasons I’ve become fascinated with it is not for what we do know, but rather what we don’t know. At least not yet.

Most of the attention in the case has remained focused on the single evening of November 5, 1975, when Walton first went missing. And most people assume that that is all there is to the story. That it was simply a one and done event, which involved one man at the wrong place at the wrong time, who suddenly disappeared after encountering a UFO. Walton reemerged several days later to relate his extraordinary encounters with alien beings and humanoids who he believes attempted to revive him aboard a vast UFO.

But was it really the end (or the beginning) of his strange experiences?

Walton has spoken at numerous lectures and in radio interviews about that fateful night and his testimony remains consistent throughout. However, I have an inkling that there’s still a lot more to his story than what we’ve heard, or rather what he might be willing to share. I’ve heard him allude to in past presentations that there are some recollections during that missing time that he has chosen not to explore further. Although this has various implications, Walton’s choice to leave the matter alone is something we need to respect as well.

Plenty of UFO enthusiasts perceive encounters with otherworldly beings to be wonderful, exhilarating experiences. Yet most have never had to live through such an encounter themselves, nor do they truly understand how earth-shattering such an event can be. These experiences can shake the experiencers to their very core. Not only in their own perception of themselves (Why me?) but in everything else they thought they knew prior (Where does this fit into my belief system?). To be faced with the startling revelation that there could be another presence out there—albeit one with no clear motive or agenda, or even true origin—is unsettling enough. But a presence that also possesses the capability to take people against their will and subject them to what equates to torture on a physical and emotional level, is disturbing to contemplate, even as an non-experiencer.

Based on current abduction research, the one and done premise in Walton’s case appears to be the exception rather than the rule. If we are to consider this ongoing pattern in the abduction scenario, then his 1975 experience should not have been the only time he ever encountered these beings. Some pioneers in abduction research, like Dr. David Jacobs and Budd Hopkins, have discovered that these extreme encounters seem to be a multi-generational phenomenon.

For example, if one individual is an abductee, there’s the strong possibility that at least one of their parents were also abductees. It could even be that one of their grandparents, or even great-grandparents were abductees too, depending on how far back we can trace the experiences. And if that is the case, then an abductee’s future children will no doubt become abductees too. Given this noted pattern of observation, we must at least consider the possibility that Walton himself, or others in his family might have a history of close encounter scenarios that perhaps go well beyond just his 1975 encounter.

At the 2015 Travis Walton Skyfire Summit 40th Anniversary there was a fascinating panel interview with some of the original investigators in the case. One of those investigators was Chuck Ellison—the first police officer on the scene at that time. Ellison’s recollection of interviewing Walton’s mother during the first three days of the manhunt could add some credence to the generational abductee possibility. Ellison had this to say at the panel…

For the next, I’m going to say, three days…and during that time, Travis’ mother and another brother came over. I visited with them—very nice lady—I like her very much. I’d like to see her again, but she’s gone, bless her heart. But anyway, not only was she funny, she was a nice lady. But she said, “They won’t keep Travis, they’ll bring him back.” I wondered, where did you determine that, lady? She said, “Well, he’s seen one before!” And I said, “He has??”

She went on to tell me that they lived in an area called Bear Springs, in (Travis’) youth. And in that area, you got to understand it’s very remote. There’s nobody back there. It’s an old…I think one of the cattle guys at one time had a…wasn’t it an old ranch place? She (Travis’ mother) told me a story or two about what he had seen in the past over there. It was all reasonable. It didn’t sound like stupidity to me. The reason why is the way she described things. I have seen things myself that way.

High strangeness abounds in that part of Arizona, which has long existed prior to Walton’s event. There are other townsfolk, including law enforcement, who will tell you about their bizarre experiences too. Perhaps the region is one of the pockets of strange phenomena that warrants an investigation beyond just merely the Walton case.

In the same panel interview from the 2015 Skyfire Summit, Travis’ brother Duane also had this to add…

We’d seen a lot of things around the Snowflake area and Saint John’s area up near there, and Chuck’s (Ellison) seen some of these things. There have been a lot of sightings. But it just wasn’t something we talked about, you know? They were there. All you gotta do is look up. You don’t need us to tell you about it. All you had to do was look up and pay a little attention to some of the things that were going on around you.

Ken Peterson is one of the other witnesses to Walton’s encounter in 1975. He has hinted at further encounters and transformative experiences following the 1975 incident too. Not to mention that Walton himself has had an additional sighting that he discusses from time to time involving a black triangle that stopped mid-flight and changed trajectory. Ironically, that event occurred as he was leaving a MUFON meeting in Burbank, CA a couple of years prior to 2015.

Perhaps in time, we’ll learn more about Travis Walton’s strange experiences, beyond what we know now, but we shouldn’t hold our breath. These experiences can be very traumatic to an individual, and if you’ve ever seen Walton talk about his encounters in public before, you can see a man who is clearly still suffering from the effects of it. I’d be willing to bet that there is still a lot more to his story that has yet to be revealed, but that’s up to him to choose whether or not to reveal.

Until then, we can only stay tuned and wait… 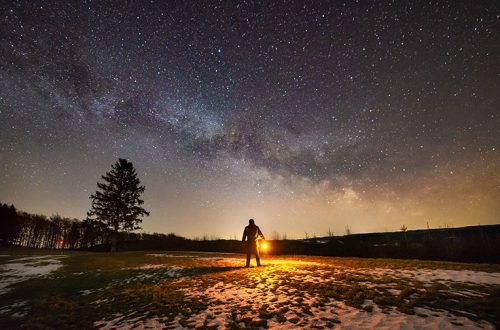