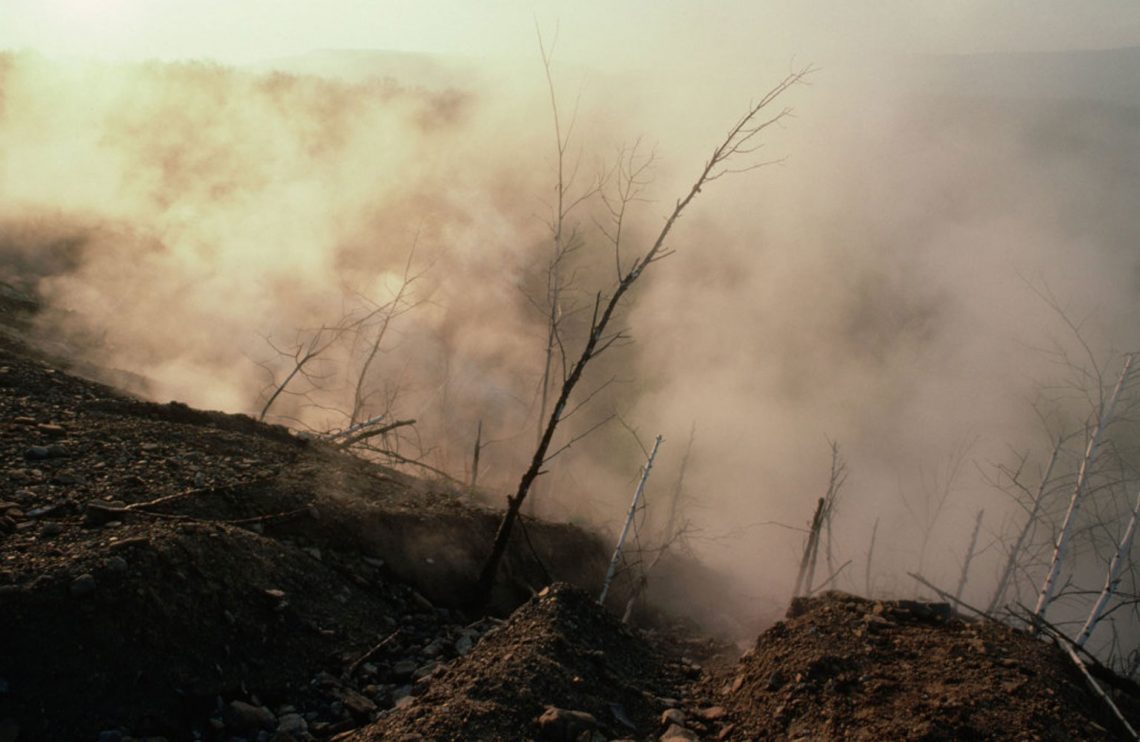 Centralia lies on the outer fringe of the Pennsylvania Coal Region. It is a virtual ghost town with broken sidewalks, obsolete street signs, and only a few remaining buildings. A feeling of foreboding greets those passing through the village, who overhear various accounts of strange shadow figures and apparitions lurking around the abandoned structures. The road leading to Centralia is easily mistaken for the Gateway to Hell because, for decades, a massive underground fire has raged beneath the deserted city streets, spewing toxic carbon monoxide and other gasses.

Of this, a modern-day Hades, writer Katie Machado observed, “On some days, a trip into Centralia might mean seeing smoke rising from the cracks in the highway’s asphalt, while other days, it might mean an eerie gray fog that claims the town after a rainy morning.”

Immersed in isolation and superstition, the Coal Region remains a place of desolate stretches of culm, things that go bumpety bump in the night, and dead silence. Here are things that people simply do not talk about. An unspoken protocol is evident as strange occurrences are discussed in guarded tones while other topics are pushed deeper into a repressed consciousness.

As the least-populated municipality in Pennsylvania, the town has conjured a bizarre tourism, fostered by individuals drawn to its surreal madness. Centralia, called the “creepiest” place in the United States,” had more people buried in its three cemeteries ­— Saint Ignatius, Saints Peter and Paul Orthodox, and Assumption of the Blessed Virgin Mary ­­— than are alive in the town today. Only a handful of people still reside in Centralia. From 1981 to 2013, its population dwindled from over 1,000 to less than ten, driven out by governmental intervention, hysteria, and, some say, the curse of an enraged priest.

Father Daniel Ignatius McDermott was only twenty-five years old when he began his work in Centralia, celebrating two Masses in a schoolhouse, having been ordained as a priest only ten months earlier. But in 1868, Centralia’s founder Alexander Rea was found murdered while riding in his horse-drawn buggy.

According to Canadian researcher Bruce Forsyth, this became the catalyst for a series of fateful events:

“Father McDermott, suspecting the killers were members of his congregation, began denouncing the Molly Maguires from the pulpit. On a night in 1869, a group of men attacked Father McDermott in the church cemetery in retaliation. According to the legend, Father McDermott made his way back to the church after being assaulted and rang the church bell to summon the townsfolk, after which he pronounced a curse on the town.”

McDermott said that there would be a day when the St. Ignatius Roman Catholic Church would be the only structure remaining in Centralia. One day, the angry priest continued, this town will be erased from the face of the earth. Three alleged members of the Irish-Catholic Molly Maguire secret society were convicted and then sentenced to death by hanging. McDermott’s anger was directed at the townspeople for supporting the Mollies but his prophecy was only partially correct. Saint Ignatius was not the last remaining structure. The stately church continued to hold mass until its final service on June 25, 1995, but, due to the underground fire, was razed in 1997.

One can easily trace the paranormal breadcrumbs, scattered from Centralia to other locales in the haunted Coal Region. In nearby Carbon County, another Molly haunts the old Jim Thorpe jail. The ancient two-story lockup has a prisoner’s macabre handprint outlined on the wall of prison cell 17. The inmate, Alexander Campbell, vowed that the handprint would forever remain on the wall as proof of his innocence. On June 21, 1877, “The Day of the Rope,” four Mollies including Campbell, were sent to the gallows for murder, underscoring a dark chapter in America’s early labor movement.

According to The Old Jail Museum “History” site:

“Before their hanging, the men proclaimed their innocence and today historians believe many of the condemned men were falsely accused of murder. Before his hanging one man put his hand on the dirty floor of his cell and then placed it firmly on the wall proclaiming, ‘This handprint will remain as proof of my innocence.’ That handprint is visible today for everyone to view even though past wardens tried to eradicate it by washing it, painting it, and even taking down part of the wall and re-plastering it. The handprint was originally thought to be Alexander Campbell’s, but after research, it is now thought to be Thomas Fisher’s.”

Richard Sharpe Shaver, born in nearby Berwick, added to the fabric of Coal Region mythology when he gave birth to the present-day cult of “underground civilizations.” Shaver claimed that he was imprisoned in a subterranean world, deep within the earth. In a letter written to Amazing Stories, Shaver documented his encounters with an ancient race called the Elder Race or Titans, who existed in caverns inside the earth. Shaver identified an evil race called “deros” and the benevolent “teros.” Editor Ray Palmer published the letters between 1945 and 1948, instructing his sci-fi readers that the stories, known as “The Shaver Mysteries,” were true.

Centralia is located about 15 miles from Sheppton, the site of a 1963 mining disaster that netted international attention and claimed one miner’s life. The missing miner’s body led to rumors of cannibalization that continue to this day. Sheppton, one of the Coal Region’s last paranormal anomalies, harbors stories of the miraculous and of supernatural humanoid creatures.

Centralia has been the inspiration for countless books, horror films, and documentaries. In 2004, director Christophe Gans and screenwriter Roger Avary began writing a script, that would be the first in a series of Silent Hill films. The 2006 psychological horror film was an adaptation of Konami’s 1999 video game Silent Hill. The film follows Rose, who takes her adopted daughter, Sharon, to the town of Silent Hill, and awakens to find Sharon missing. While searching for her daughter, she fights a local cult and begins to uncover Sharon’s connection to the town’s dark past.

Director Gans described the Silent Hill concept of the town’s connection to the child Alessa and the cult, “It’s a town of people trapped in dark dreams, and she inflicts onto the town what those people did to her body. That is, to me, the meaning of the darkness. The appearance of the town is corrupted in the way that her own flesh was wounded.”

Avary used Centralia as his inspiration for the town of Silent Hill, modeled after the town’s unique features, including its gothic-style church. He explained that his father, a mining engineer, had told him stories about a raging underground fire that released toxic gases forcing the residents to abandon their town.

The history of Centralia might have been ripped from the pages of a horror novel. An underground mine inferno has burned under the tiny community for more than 50 years and is believed to have started in an abandoned mining pit that was used to get rid of the town’s garbage. Nothing has been able to extinguish the fire. Workers attempted to blast and excavate the inferno and later drilled boreholes, pouring in concrete, wet sand, and fly ash to suffocate the fire. As a last resort, a huge containment trench was dug to stop the fire’s progress, but that failed as well.

“Underneath Centralia, the endless fire has created an environment as deadly as the surface of Saturn. While the gases aren’t lethal up above, they still play hell with the resident’s health. Poison gas has even built up in some citizens’ basements. One guy explained how that all simply became part of the weather in Centralia. ‘We always had the smoke, and my wife felt sick if she was near it. We stay away from it. It’s bad news. Only the tourists go into the damn thing.'”

The village, a once-bustling boomtown, had seven churches and a tight-knit community of over 2,500. But all of that changed around 1984, when almost all of the residents relocated, accepting the government’s buyout offers. Most of the houses were bought and torn down as part of a federal relocation program, although a few residents remained in protest, refusing to leave their lifelong homes in spite of the toxic fumes. In 1992, Bob Casey, then governor of Pennsylvania, declared eminent domain, condemning all buildings and appropriating the town. Essentially, the residents were bought out. The majority of inhabitants agreed to the government program, purging the village of human presence. Over $42 million dollars were spent to relocate the residents to safer ground. Massive bulldozers demolished over 500 homes with the remaining structures being condemned. Conspiracy theories spewed out rumors that the government and the coal companies wanted to drive out the citizens and claim the rich anthracite veins below.

The dwindling residents unsuccessfully fought back in court. In 2002, the U.S. Postal service revoked Centralia’s zip code, 17927, forcing the locals to receive their mail via post office box. The final act in this tragedy occurred in 2009 when Governor Ed Rendell began the formal eviction of the remaining citizens.

Rt. 61 once ran through the town but has since been closed and rerouted after the road surface shifted and buckled from the intense heat below. Cracks ripped across the paved asphalt road and hot blasts of steam shot through the highway. The residents were choked out by fumes of carbon monoxide and acrid smoke. The Transportation Department abandoned a 3⁄4-mile section of Route 61 that eventually became known as the Graffiti Highway. Over the years, the road has attracted gawkers and curiosity seekers who want to see the smoldering and abandoned mountainside, or to spray paint the graffiti-strewn roadway. In 2017, the Commonwealth of Pennsylvania began to target curious onlookers, citing trespassers on the infamous Graffiti Highway.

Taking into consideration all of the bizarre, seemingly paranormal elements, an article titled “Is Centralia Haunted?” offers an interesting conclusion.

“With any strange or unusual occurrence comes rumors and stories. Centralia is no different in that respect.  Walking amid the ruins of this modern-day ghost town gives one the feeling of supernatural forces working under foot. From visitors to the town, stories arose from these ashes. Some were stories from visitors who left in fear after thinking they saw a person or thing, heard odd sounds and some felt they were being watched. Others go as far as to say Centralia is the gateway to Hell. Imaginations can run wild. As Centralia becomes a modern-day ghost town and the fire encroaches upon the graveyards of the abandoned town, rumors have circulated that Centralia is haunted.”

And perhaps it is. Today Centralia is a weed-strewn ghost town where only a handful remain, living above the persistent nightmare of an underground fire that refuses to burn itself out. How long this buried inferno will blaze, the devil only knows. 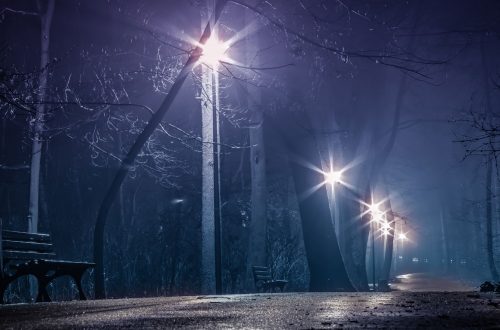